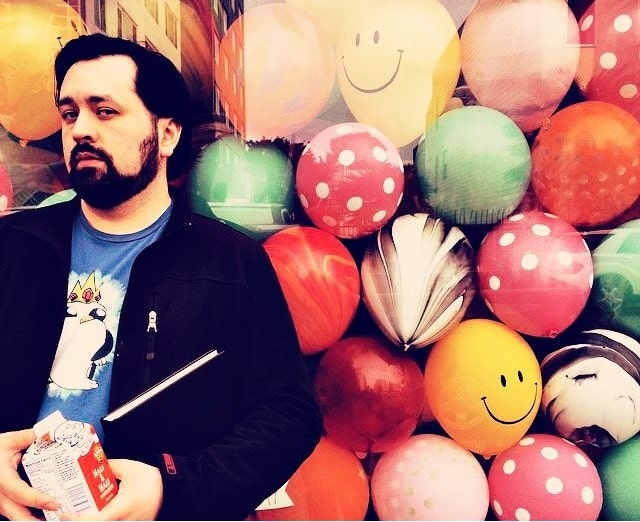 On the first Tuesday of each month The News, presented by SOMArts Cultural Center, features new, queer work by Bay Area artists. The News is a monthly cabaret evening that spotlights 10-minute or less performance pieces, experiments, and works in progress by pre-selected solo artists, groups, or troupes.

On Tuesday, August 2, The News is guest-hosted by Baruch Porras Hernandez, and promises a night of queer/punk culture-fucking liberation with sonic beats, 6 inch heels and colorful explosions!

Drawing from personal stories and experiences, the artists writhe all over the map with Bollywood inspired dance, machismo resistance, comedic storytelling, sonic mantras, femme fierceness, and kink infused poetry. Don’t miss this night featuring the legendary and the soon to be legendary performers: Fiera!, Kohinoorgasm, SNJV, Porras-Hernandez, and Wonder Dave.

Admission is FREE! SOMArts is offering free admission in hopes that if you can afford to donate, you will support the artists onstage when the hat passes. RSVP on EventBrite to guarantee a seat.

Baruch Porras Hernandez has organized live spoken word and storytelling shows all over San Francisco for the past 7 years. He is a regular KQED Arts host and curator. He’s the Voice of Shipwreck SF Erotic Fan Fiction Competition, currently the Muni Diaries’ reigning Muni Haiku Champion. In San Francisco he’s won Literary Death Match, WriteClub SF, has won the Moth in LA and represented San Francisco in their LA Championship. He’s the founder of ¿Donde Esta Mi Gente? which was created in part by the REGEN Artist grant from Galería de la Raza. His solo play currently titled ¡Agárrate! is being developed for production by a grant from the San Francisco Arts Commission for Individual Theatre Artists. He was a Lambda Literary Poetry Fellow in 2014, and will be a Lambda Literary Playwriting Fellow in 2016. His poetry can be found in several anthologies, he’s featured at Radar Productions, Writers with Drinks, LitCrawl, Queer Rebels Fest, The International Flor y Canto Literary Festival, and is the head organizer for The San Francisco Queer Open Mic. Recently he was named a NALAC Latino Leader in the arts and took part in the NALAC leadership Institute. Read his work online at The Tusk, and with Drunk in a Midnight Choir. For more.

Fiera! was born as a form of resistance to deeply rooted and entrenched machismo ideals and highly conservative values. This queer femme latinX artist started performing at the legendary Aunt Charlie’s Lounge about a year and half ago. With little experience in front of an audience, she became a regular, putting on a new show every week for almost a year. Fiera’s yearning for queer liberation within her native Mexican culture drove her to put on 6-inch heels, dresses, wig, while painting a fierce face as a protest to her perceived decadent lifestyle. At the same time, she continues to explore the beautiful art of illusion and drag. In the process of doing so, she has become very successful in the club scene, making appearances at such popular night clubs as The Stud, Oasis, Moby Dick, The Lookout, and other venues. She also enjoys collaborating with much more established drag artists and Djs. Recently, she has begun to evolve her art towards a new trajectory, incorporating counter-culture and queer-punk elements or any other abstract elements that she feels help to relay her message.

As a mixed race and queer artist, Kohinoorgasm (one word: ko-hee-noor-gasm) seeks to expand the dialogue around multicultural, ambiguous identity-based experiences. Her music blends and layers hypnotic beats and sounds, with vocals in Hindi and English. Her lyrics are often repetitive and pensive, forging mantras and phrases into a sonic thought-scape and encouraging the listener to reflect on such things as self-love, resilience, anxiety, and agency. She is currently experimenting with the quality of her live performances, and she hopes to incorporate many styles of movement and expression!

SNJV creates provocative and attention grabbing stage moments. His performances tell complex stories through dance while providing the audience with a colorful explosion of energetic movement. He is dedicated to intertwining the performance into everyday life with messages of compassion and unconditional love embedded in every move. He is an enigma wrapped in a riddle and so are his performances.

Wonder Dave is a writer and performer from Minneapolis, MN, now living in California. He has toured the country performing at poetry venues, comedy shows, schools, cabarets, science fiction conventions, burlesque shows, and bowling alleys. He is the host of Oakland’s Story Showdown and San Francisco’s Literary Pop. He is a fixture at the underground variety show Tourettes Without Regrets. Find him online at WonderDave.org.