A Promise Not to Forget: Dia de los Muertos 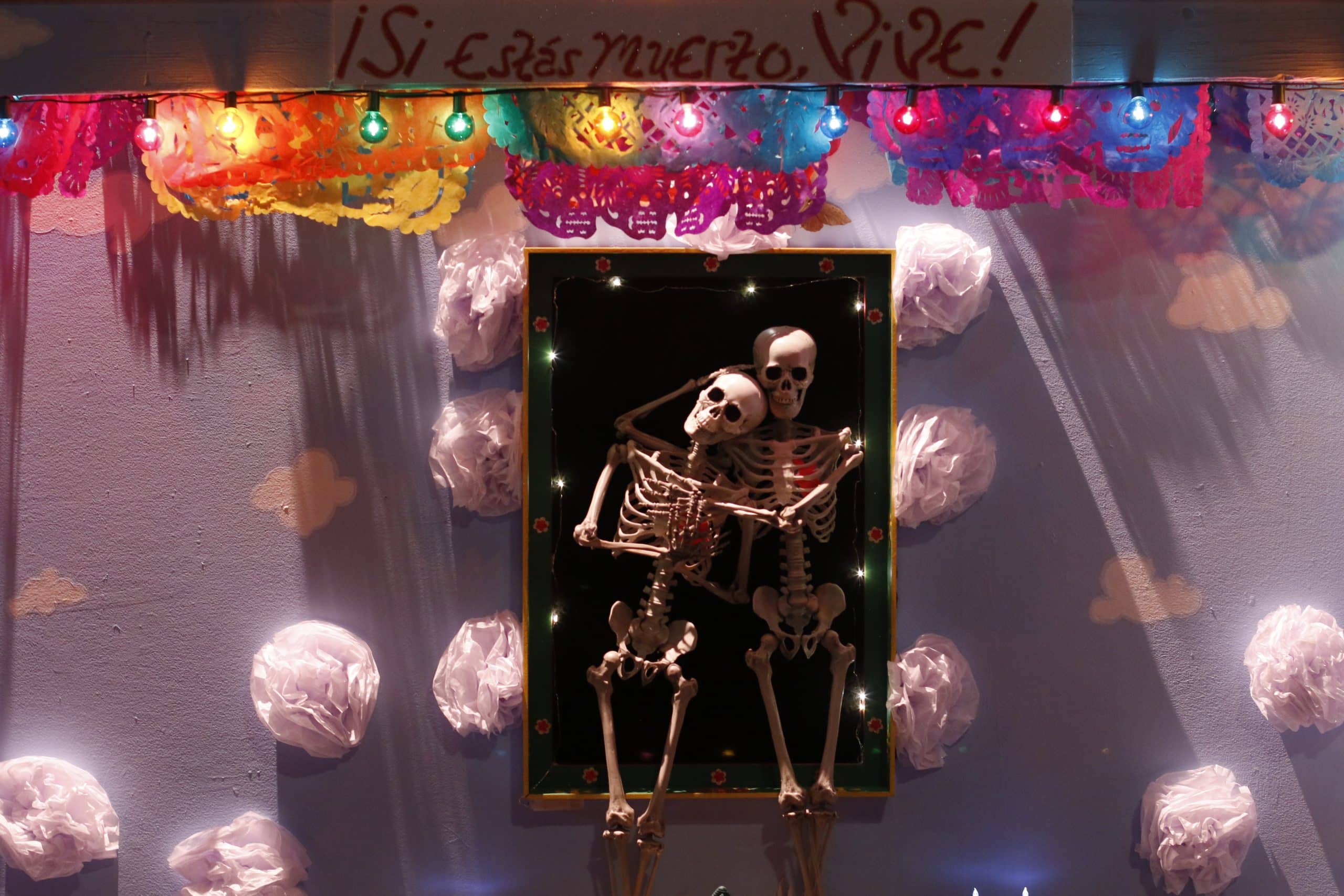 A Promise Not to Forget: Dia de los Muertos

Now in its 15th year, the annual Day of the Dead exhibition at SOMArts Cultural Center offers one of the most internationally diverse Día de los Muertos celebrations in the United States. Merging traditional Mexican altars with contemporary art installations, the exhibition presents a superabundant array of perspectives remembering, honoring, and celebrating the dead. Inspired by cherished relationships, current events, and personal and collective histories, more than 25 altars by over 50 participating Día de los Muertos artists build a dense environment of creativity that creates space for meaningful reflection and community engagement.

Chosen by father and son curators René & Rio Yañez, this year’s theme, A Promise Not to Forget is a call to remember our ancestors and honor especially those whose lives have been unnecessarily lost due to violence. A Promise Not to Forget is dedicated to San Francisco poet, musician and activist Silvia Parra, known to many as Mamacoatl, and to Cynthia Wallis, departed partner of curator René Yañez. An artist in her own right, Wallis was well known as a photographer and Bay Area theater director. The third dedication to Martha Rodriguez honors the noted San Francisco visual artist who participated in SOMArts’ Day of the Dead exhibitions for several years.

Exhibition highlights include returning artist Victor-Mario Zaballa, who will build a variation of a traditional Aztec structure called a Cuexcomates made of papel picado and fluorescent lights. Youth artists from Ryse Youth Center’s Media, Arts and Culture Department will create a collaborative altar honoring young people whose lives have been lost due to violence in the city of Richmond.

Adrian Arias’ altar honoring Silvia Parra will be created in conjunction with a mural the artist is painting in San Francisco’s Mission District where Parra lived and worked for many years. The interactive altar will feature an inner room where audience members will be invited to listen to recordings of Parra’s music.

Filmmaker Gustavo Vazquez will create a spectacular exhibition entrance with digital video projection utilizing architectural elements of SOMArts’ postindustrial space to welcome visitors into the space of reflection and engagement.

Drawing Circle
Friday, October 21, 6:30–9:00pm
$10, no one turned away for lack of funds
Tickets: promisedrawing.eventbrite.com
Experience the exhibition by creating artwork of your own in this interactive drawing circle facilitated by curator René Yañez.

ABOUT THE CURATORS
René Yañez, founder and former Artistic Director of San Francisco’s Galería de la Raza in San Francisco’s Mission District, was one of the first curators to introduce the contemporary concept of Mexico’s Day of the Dead to the United States with a 1972 exhibition at the Galería. Each subsequent year he curated a Day of the Dead exhibition either at the Galería or at the Mission Cultural Center for Latino Arts. Then, in 1994 and 1998, he curated Rooms for the Dead and Labyrinth for the Dead at the Yerba Buena Center for the Arts. His first year curating a Day of the Dead exhibit at SOMArts Cultural Center was 1993.

Active as both a visual and performing arts curator and artist, as well as an outspoken activist, Yañez co-founded the successful Chicano performance trio Culture Clash. In 1998, he received the “Special Trustees Award in Cultural Leadership” from The San Francisco Foundation for his long-standing contribution to the cultural life of the Bay Area.

Yañez has curated numerous exhibitions including Chicano Visions (2001–2007), an exhibition hosted by museums such as the de Young Museum (in San Francisco), El Paso Museum of Art, and the Smithsonian Institution.

Notable recent projects include programming produced for the de Young Museum’s Picasso: Masterpieces from the Musée National and The Fashion World of Jean Paul Gaultier: From the Sidewalk to the Catwalk. This programming featured Yañez’ interpretations of the works of Pablo Picasso in anaglyph 3D, as well as a fashion runway show Viva Frida: From the Blue House to the Catwalk.

In 2009, 2011, and 2012, Yañez created a living altar for the San Francisco Symphony’s Day of the Dead concert featuring a large cast, crew, and suite of musicians, curated Four Juan Five, an exhibition about the San Francisco Mission District at Alley Cat Books, and performed in Guillermo Gomez-Peña’s Corpo Illicito at the New Performance Gallery in San Francisco.

In 2014 Yañez printed a popular zine, Zine a la Mode over a Pot of Coffee, with a circulation of over 800 copies. His recent work includes a collaboration with artist Patrick Piazza for an installation on the De-Appropriation wall on Valencia street, an exhibit with the S.F. Print Collective about displacement, and Las Chicas de Esta Noche, a drag queen review show at the de Young Museum in collaboration with comedian Marga Gomez. With his collective The Great Tortilla Conspiracy he has participated in art events benefitting the San Francisco Coalition on Homelessness and the St. Peters Dining Hall.

Rio Yañez, born and raised in San Francisco, is a curator, photographer, activist and graphic artist. As an artist he has exhibited his work from San Francisco to Tokyo and created artwork installations for Jean Paul Gaultier’s touring exhibit The Fashion World of Jean Paul Gaultier: From the Sidewalk to the Catwalk. His Bay Area solo exhibitions include Pocho Adventure Club at Galería de la Raza in San Francisco, Cholas to Picasso: The 3D Artworks of Rio Yañez at Asterisk Gallery, Bubblegum Crisis at Ginger Rubio Salon and Pochos & Pixels at the University of California, Santa Barbara’s Multicultural Center.

Yañez is a curator of more than 10 exhibitions. As with his curatorial work, a part of Yañez’ visual art practice is dedicated to exploring how Chicano and Asian Youth have used social media to exchange aesthetics and language. In addition to creating graphic art, Yañez is a founding member of The Great Tortilla Conspiracy, the world’s first and only tortilla art collective. As a tortilla artist he silkscreens art and political graphics onto tortillas using edible inks and serves them to eat to the public as interventionist performance art. Yañez’ recent projects include self-publishing board games designed around Chicano pop culture icons and a collaborative series of portraits with activist and performer April Flores.