Ozi Magaña in the Ramp Gallery 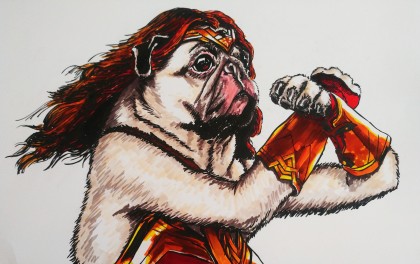 Ozi Magaña in the Ramp Gallery

Ozi Magaña presents P.U.G., a body of work that shows an alternate reality where superheroes have become pug versions of themselves. As goofy as an idea as that may seem, what would superheroes be if there wasn’t a little bit of goofiness involved? As an artist, Ozi has continuously created work that combines the different aspects of subjects he finds interesting. As a comic book fan, some of his favorite narratives have to do with visiting other dimensions, and seeing the manifestations of each character. As a pug enthusiast, he has been looking for a way to bring the anomaly that is the pug into his creative endeavors. Ozi’s goal with this series was to combine the delightfully puzzled pug physicality with the costuming, and heroic spirit of popular superheroes. This series harkens back to a series Ozi has been working on over the years, which fuses parts of his cultural identity with the comic book heroes he grew up reading. Traditionally an oil painter, Ozi decided that for these works,  he would use pen and ink on paper to give it more of a comic book aesthetic. From this exhibit, Ozi only wants people to take away the idea that even something as fragile and pint sized as a pug, can become a powerful and heroic symbol of goofiness.

Listen to the artist talk about their work

About Ozi Magaña
Ozi Magaña is an artist who believes that creativity is informed by what resonates with you throughout your life. He believes that every bit of life experienced is an ingredient to any art manifested and brought into this world. Born and raised in San Francisco, Ozi grew up in one of the most diverse cities in the country. Ozi looked around where he was growing up and realized that his potential was unlimited, that he could follow whatever path he wanted as long as it rang true to his truest self. This combined with the cultural bombardment that was the 90s formed his unrelenting pursuit of being an artist. As a child he had always said that he wanted to be an artist, despite some naysayers who were quick to quip about the low monetary return of such an endeavor,  With support and love from his friends and family he continues to achieve his childhood dream. From all of this Ozi has been more and more interested in combining facets of his own personal history into the creation of a world as he would like to see it. Everyone has their own narrative and sees life in their own way, which, as an artist, is perfect material to explore personal passion and expression. The work Ozi does is autobiographical. It is about his friends, his lovers, his experiences, his emotions, his struggles, and most of all his never ending quest to make cool shit.

About the Ramp Gallery
The Ramp Gallery accepts exhibition proposals on a continual basis. Submission Guidelines can be found here. To purchase work on display or for more information email [email protected]. You can visit The Ramp Gallery any time SOMArts Cultural Center is open.