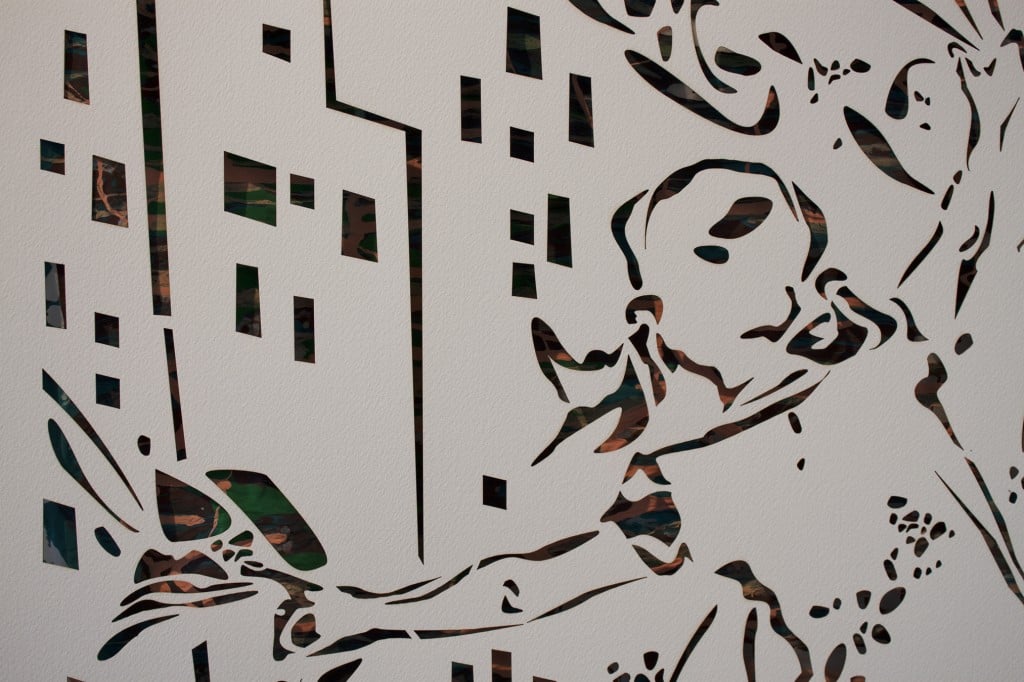 Born in Ukraine, Elvira Dayel is currently based in San Francisco Bay Area. Dayel is a multi-media artist, who works in series of large abstract works of drawings done in soft/dry pastel on paper, 3D-printed mixed media sculpture, cut-paper abstractions. Dayel’s work may be described as conceptually surreal influenced by modern art, architecture, spatial organization, and human condition. Trained as an artist & an architect her work is interwoven and interconnected between and within the media she uses. Dayel says: “I see myself as a minimalist using only as much as needed to convey an idea.” Invented landscapes are new realities, they are constructs; they are deconstructed and re-imagined. Loosely grounded these new parallel realities provide a vision for an abstracted notion of a place, space, or absence thereof.

Work displayed here, according to the artist, “is hot off the press” and was specifically developed for the vitrines for the SOMArts Ramp gallery.

Listen to the artist talk about their work in their own words:

About Elvira M. Dayel
Elvira M. Dayel was born in former Soviet Union, in the republic of Ukraine, in a small town at the border of Ukraine and Romania, on the shore of the beautiful fast flowing River Danube.   She grew up in the time of perestroika; time of the ultimate fall of the Soviet Empire.  Dayel was always interested in the arts and for a number of years attended art school.  She was brought up to love and appreciate the arts, to look at the world with the eyes wide open; her mother “showed” her how to “see”.

When Dayel was 16 years old, her family immigrated to the US.  In 1994 this country and the city of Los Angeles gracefully accepted newly arrived refugees.  Dayel finished Santa Monica high school in 1996.  She then attended UC, Irvine, where she obtained two bachelor degrees in Visual Arts, Biological Sciences, as well as a minor in Digital Imaging and Design.  To expand her horizons, she went on to receive Master’s in Architecture from UCLA.  Dayel has moved to SF Bay Area over 10 years ago.  Ever since, here she has been pursuing her dream, her vision, her passion.

About The Ramp Gallery
The Ramp Gallery accepts exhibition proposals on a continual basis. Submission Guidelines can be found here. To purchase work on display or for more information email [email protected]. You can visit The Ramp gallery any time SOMArts Cultural Center is open.